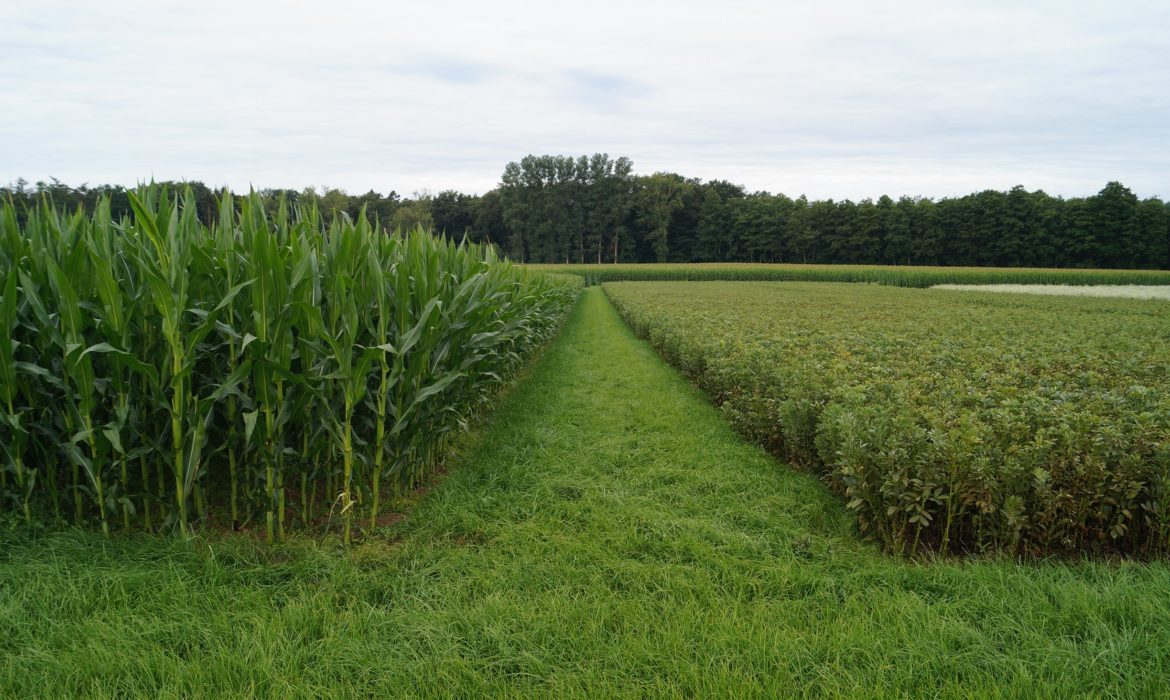 The Controlled Row Farming method of cultivation is being tested on a trial area in the immediate vicinity of the AMAZONEN-WERKE factory in Hasbergen-Gaste.

The trials are for demonstration purposes and, following initial tests in 2020/2021, are now being set up in a structure which can be sustained in the long term. The trial design is adapted to the 27-metre tramline system of the partner company which manages the land in Wambergen.

Three crops are grown each year on the 3 ha trial area in a 10 ha field, in order to make the trial attractive to visitors. Each crop has four variants with a width of 12 metres. This makes it possible to repeat plant appraisals over a length of approx. 150 metres and to record crop yields by means of core threshing. The 12-metre wide plots allow working widths of three and six metres for sowing and cultivation.

The four trial variants Standard (A), Modern (B), CRF-reduced (C) and CRF-optimised (D) are laid out in the form of simple strips. Randomisation is not possible at this location in the arrangement with series technology.

Standard: This trial variant demonstrates the conventional, classical cultivation customary in the region. It provides a realistic opportunity to measure or compare the different trial variants against this conventional variant.

Modern: The “modern variant” is cultivated with the usual land management and extended by current and innovative plant cultivation measures. These could be alternative row widths and seed rates, undersown crops or alternative plant protection strategies.

CRF-reduced: The aim of the CRF-reduced variant is to put the companion plants in the foreground and to devote particular attention to the promotion of biodiversity with a reduced use of inputs. The row spacing of 50 cm is provided in single or double rows, depending on the crop. The companion plants in the intermediate area should develop early and intensively. Depending on the crop and the seasonal weather conditions, the companion plants can be mechanically reduced in the rows, in order not to endanger the maturity and threshability of the main crop.

CRF-optimised: The CRF-optimised variant pursues the goal of keeping yields stable with optimised input costs. The inputs can be applied exclusively in the row by sowing with a row spacing of 50 cm, which is identical to the CRF-reduced variant.

A standard 27-metre crop protection sprayer is used on the 3-metre grass strip outside the actual trial site for full-area plant protection. The machine can run different applications on a plot-by-plot basis by switching off the part-width sections. Row-specific nozzle technology or drag hose systems for liquid fertilisation can also be used in the 50cm CRF system.

A complete plot can also be fertilised with granulated material via the lateral grass strips with a twin disc fertiliser spreader. The new Border-TS border spreading system provides excellent lateral distribution within the 27 metres. The use of a pneumatic spreader, which is often used in field trials, is not necessary.

The grass strips have the advantage of being easy to drive over all year round and are also easy to access during field inspections.