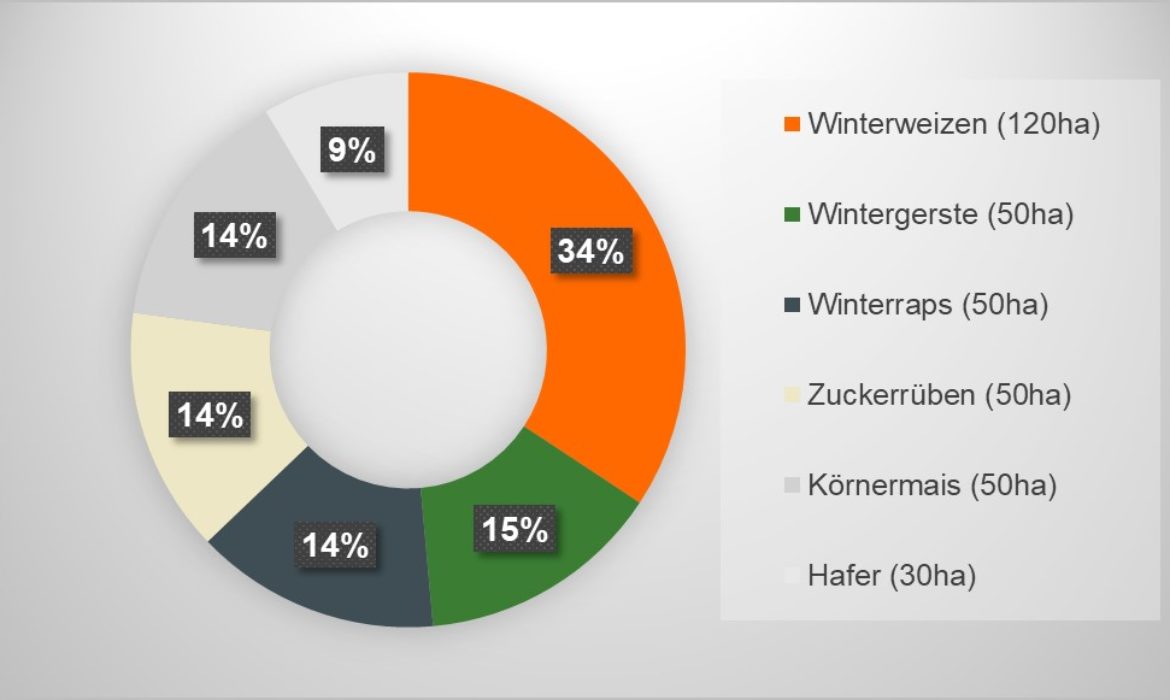 Apart from the practical implementation of the Controlled Row Farming method with regard to the plant cultivation and ecological effects, the question of economic viability also arises. How does the increased financial expenditure for technology, labour and time required in this alternative arable farming system compare to the savings, especially for fertilisers and plant protection agents?

We see the medium-sized arable farms of Western Europe as the target group for the method. A fictitious 350-hectare arable farm in the Börd landscape south of Hanover serves as the basis for the following considerations. We calculated alternative scenarios together with a student work group from the Osnabrück University of Applied Sciences.

Mechanisation for application of the CRF system

The initial situation is assumed to be the usual regional mechanisation in a 27-metre tramline system: A plough, cultivator and compact disc harrow can be used with a 200 hp tractor. A 3-metre sowing combination with active tillage, a precision air seeder, a mounted fertiliser spreader and a trailed field sprayer are common equipment on a farm with a tradition of good revenues from sugar beet.

When converting to the CRF system, the focus is on reorienting the entire farm to 6-metre sowing and hoeing technology. Various implements can be supplied via the FTender 1600 front tank: Cereal seed coulter with 12 double rows and TwinTec coulters with a 15 cm spacing. The 12-row precision air seeder can be used to apply under-root fertilisation via the front tank, and the 12-row hoeing technology can be used to apply undersown crops. A strip-till cultivator with variable, row-specific 25 or 50 cm spacing, which could be used to deposit fertiliser from the Ftender, under the surface, has not yet been considered but is foreseen in the system.

Precise band spraying integrated in the hoeing technology is also at the heart of the system. The FT-P 1502 front tank and the row spraying device are therefore part of the mandatory equipment. The UX 4200 Special trailed sprayer with 27 m is replaced by an UF 1302 mounted sprayer with 18 m, in order to continue to make the most of the front tank. In combination with the FT-P 1502, the tank is large enough to achieve acceptable acreage output.

Other tramline systems and mechanisation are also conceivable. For example, band spraying with a conventional trailed sprayer (see AmaSelect row) is also possible. This has a significantly higher acreage output but does not provide the precision of an integrated band spraying system.

Cooperation with neighbouring farms in the inter-farm use of fertiliser and crop protection technology can also be appropriate if the bulk of the applications are placed row-specifically and the utilisation of the farmer’s own standard machines is thereby unduly reduced.

Economic benefits of the effects of the CRF system

The core of the CRF system is the row-oriented placement of as many inputs as possible. Herbicide savings are very easy to examine. If the band width is 10 cm for crops in single rows (maize, sugar beet, rape) and 20 cm for double rows in cereals, a 50 cm row width results in reductions of 80% and 60 % respectively. Savings of fungicides and insecticides are also conceivable in row-specific applications with e.g. droplegs. They were not considered in the initial calculations, as sufficient knowledge about plant cultivation is not yet available.

The increase in efficiency arising from placed fertilisation has been known about for years, especially for maize. It is also increasingly being used for the seedling development of cereals (see SingleShoot method). Further fertilisation measures will be applied row-specifically in the CRF system depending on the mode of action of the fertiliser type. Both the hoeing technology and the conventional sprayer open up various possibilities for placing solid and liquid fertilisers next to, on top of or under the row. We assumed that only the third application in cereals is applied across the full working width for this calculation, which means that only 26% of all fertilisation measures are applied across the full working width. We assumed a moderate increase in efficiency of the fertilisation measures of 10% at constant yields in the calculation.

Taken together, the above reduction potentials provide a cost reduction of 43 % or 64 € /ha for plant protection and 10 % or 10 € / ha for fertilisation.

The use of implements with smaller working widths and tanks for band spraying and fertiliser placement results in significantly lower outputs per hour, which have a negative economic impact. This results in an increase in machinery and labour costs of 63% or 14.945 € / year in the calculation.

On balance , however, it becomes clear that the absolute costs per hectare for the machinery increase less than the reduction in the costs of the plant protection agents. This is despite the fact that we set a very high hourly rate of 60 €/hour in the calculations for all work involved. Shifting the work from the farm manager to a part-time driver can bring additional reductions.

Sugar beet is a concrete example of this:

The balance varies greatly depending on the crops. The intensive use of herbicides in sugar beet brings clear cost advantages. There are slight advantages in maize and rape and the effects cancel each other out in cereals.

The costs of the CRF system are 1 % below the usual land management if the complete crop rotation of the 350 ha farm is considered.

The challenge of working time

The change in mechanisation results in completely different outputs per hectare. The Amazone output calculator shows an output of 12.4 ha / hour for the initial situation with the UX 4200 Special, 27 metres, with a total annual output of 1370 ha. The conversion to herbicide band spraying with a hoe and the FT-P results in a required annual output for the combination of about 670 ha. With an output of 4.9 ha/hour, one of the main challenges of the CRF system becomes apparent. The usual full-width application is reduced to about 700 ha / year with an hourly output of the 18m mounted sprayer of 7.7 ha. The difference between the usual full-width spraying and the use of hoeing technology becomes more striking when the working time required for 120 ha is considered. The 27-metre sprayer requires approx. 10 hours, the 6-metre hoeing technology 24 hours.

Adding together all operations over the complete crop rotation, including all downtimes such as transport and filling, shows an increase in the working time requirement of 48 %. This is a challenge from the point of view of regional difficulties in finding labour for agriculture and increasing labour costs. Sufficient labour is available from a global perspective, but it has not yet been possible to resolve this imbalance on a political level.

The increasing automation of work processes in connected implements (e.g. steering of the hoe, control of work quality with Argus Twin) leads to higher outputs per hour due to a reduction in the driver’s workload and higher forward speeds. As can be seen from the example of precision seeding (EDX, Precea), much has been done in recent years to maintain the quality of work, even at high speeds.

In the medium term, Controlled Row Farming would be ideally suited for a complete workforce of autonomous field robots, thereby solving the challenge posed by increased working time requirements. In this case, the working widths can become smaller again and the speeds decrease if the available working days permit this. This could potentially be of benefit to precision and work quality and, last but not least, lead to a reduction in diesel consumption per hectare.